The revolution in Romania in December 1989 led to major changes in my country - in theory, and in theory for all of us. When you are in the middle of a transformation as big as the the change from 50 years of communism and isolationism to full-on market capitalism you would expect things for everyone to change overnight - but in practice real changes were incremental, cumulative and happening much faster for some than for others.

And for many of those for whom December 1989 opened immediate opportunities to throw away the shackles of the past even they did not always see the real impact it was having on their lives. You just carried on living for today, but living at a much faster pace.

For some, change meant just more products on the prettier shelves, easier, more comfortable trips abroad on newer planes, more TV broadcasting of programmes that made us laugh or inspired our new curiosity, it meant the freedom to criticise (carefully), the freedom to display your new wealth, for others, particularly the older members of our society, the freedom to become even poorer.... and so on.

For the younger generation the opportunities opening up in front of their eyes over the months and years meant new careers working for foreigners or new owners of old businesses, or trading for themselves across our new open frontiers - some left the country for good, something that was not permitted before for most of us.... they all embraced change.

Others, even some of the young, stayed doing much as before ... they went to the same job (by newer, cleaner bus), did the same thing before and after...... and started to fear about losing their job as old activities disappeared or were taken over. The ingrained attitude that nothing can be done to improve my life, ingrained over grey decades of sameness, was I am where I am, I need to keep my head down and things will be OK........with OK meaning the safety of no changes, respecting old Communist rules and ideals in a completely new environment ......and yet feeling increasingly alienated, lonelier, getting more and more frustrated that life around them was getting "louder", that others, not them were enjoying the new world and the opportunities created by it!

One can embrace change anytime! I strongly believe that. But is that just a person who has done so speaking?

I've been painting for almost 9 years now, much to my mother's ridicule. Although she was able, occasionally, to see the joy it gave me, her logical brain saw this as a useless waste of time, even a stupid activity given the need to adhere to the old ways. The paints and brushes and books I sent her in an attempt to encourage her to join my journey was met with heated rejection. Intense negative reactions came with the fear of embracing change.

It took my mother, alone in her flat in Bucharest, a few good years to join the world of self expression through paints ... but much to my joy she now paints from time to time .....and I was over the moon to receive a Christmas present two days ago, including two of her new paintings (the photo is below).

What has happened? She gave herself limited permission to embrace change! And guess what ... she realised that ... embracing change is not bad at all! 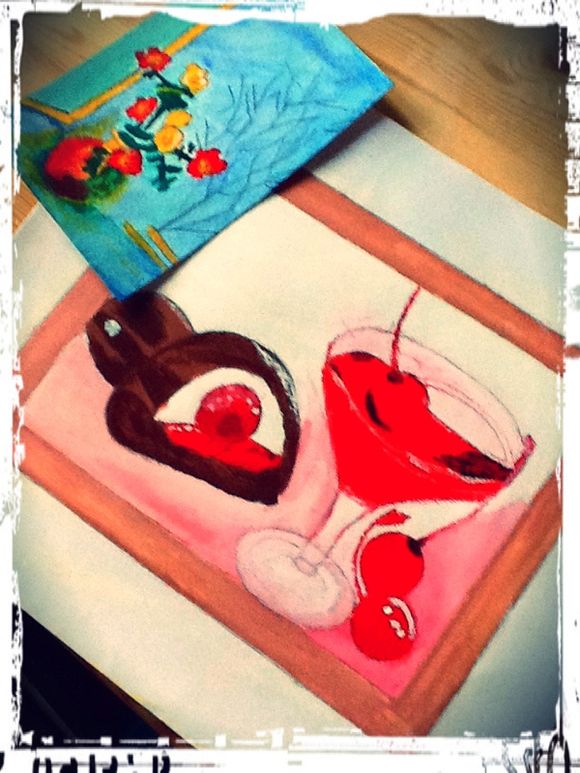 Well, embracing art is just one of a kind thing that we should know about. Art is everything.

wow, Corina.... what a talent she has... my GOd she is so good at it! AMAZING.... Beautiful beyond words!I am stunned and sooo happy for her!

Dear wall art :) yes,aRt is everything an amazing cathaliyst for change!

Simona my darling yes, she is talented, she always was ....sadly most of her life was lived under the banner of .....what are the people going to say about me if .......and stayed in her corner, consumed by her own strict rules. Nonetheless this is a huge step! Many hugs my friend!

This is only a preview. Your comment has not yet been posted.

The letters and numbers you entered did not match the image. Please try again.

As a final step before posting your comment, enter the letters and numbers you see in the image below. This prevents automated programs from posting comments.

Having trouble reading this image? View an alternate.

(Name is required. Email address will not be displayed with the comment.)

Food for your soul!